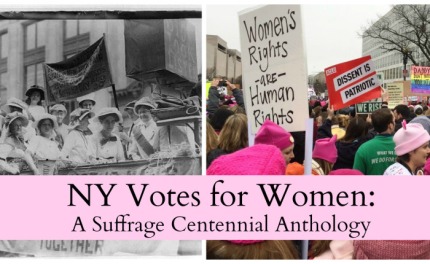 What sort of responses did you get when you asked for contributions to your book?

STACEY: The inspiration for the anthology, NY Votes for Women is the centennial anniversary of women getting the right to vote in New York State. When we put out the call for proposals, some people said, “I’ve always loved this movement.” They were history-minded, with ancestors involved in the original movement. Others said, “I’ve always had a sense that this is important to me as a woman and my right to vote in America, but I don’t know anything about these suffragists. We weren’t taught their stories.” And others said, “I don’t really know about the suffrage era, but let me tell you about my experience at the Women’s March in 2017.” So we got a whole range of stories. They make for a fascinating collection.

Why do you think it’s important for people to know about the movement today?

STACEY: Because I think we learn a lot from history. As we’ve been doing this project, it’s been a chance for me to learn more about who was involved back then. For example, there were nuances in the movement in terms of how race played out—or didn’t. I contributed a poem based on something a woman suffragist from Tompkins County said. Her name was Juanita Breckenridge Bates. In 1917, the vote for women’s suffrage passed, but in 1915 a vote for it came up that failed. Bates was quoted in the paper then: “Suffrage has fallen, but it’s fallen forward.”

What were some of the things you discovered that interested you most?

STACEY: There’s a piece written about a transgender woman, and another about the experiences of a black woman. There are stories from people who are immigrants but call New York home now. We had some lovely meditations about the meaning of intersectionality.

How did you go about gathering writers for the project?

STACEY: We put out a call for proposals, started a Facebook page and a WordPress page, and reached out to writers we knew in the community. I did some email campaigns as well, contacting people in women’s studies and creative writing departments in colleges around New York State. One writer sent us a piece she had published in the Huffington Post.

NORA: We also contacted the League of Women Voters. In addition, I periodically hold a Writer’s Block Party for published and unpublished local writers. I plugged the anthology through that.

What surprised you as you edited the various essays in the book?

STACEY: There are a lot ties to the last election, and what we thought was going to happen that didn’t happen. A lot of people have been struggling with those issues. The quotation–If you fall make sure you fall forward–has almost become a mantra. It’s another way to say, Don’t be afraid to use your voice!

Who are some of your favorite feminist writers working today?

STACEY: Ruth Bader Ginsburg is one badass lady and I love her. I’m inspired by a lot of the female political leadership we see now.

What do you most want people to take away from this anthology?

NORA: A lot of it is about voice. It’s about women’s legacies, writing something that your kids can see. It’s about saying things that you’ve never said to anyone else before—having the freedom to do that. What will make this anthology compelling is a reader’s realization: “Oh, I’ve felt that! I’ve been there!”