Our first reading, which happened last Sunday, on 11/8/15, at the Tompkins County Public Library, had an amazing turn out. 10 authors read, with a brief introduction from the anthology’s editor, Rhian Ellis.

Just look at that crowd! One of the best things about the Finger Lakes area is the community’s love of great writing.

Our first reading author was Mary Gilliland, who is a poet, but her piece in the anthology is an article entitled “Iraquoia.” 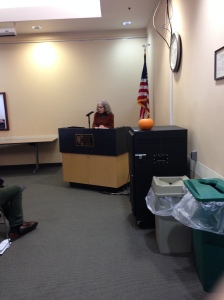 Ann Gold read after Mary, and she is the Thomas J. Watson Professor of Religion at Syracuse University. She’s also a Professor of Anthropology.

The third reader was Dan Gold, who published “Changing Life in an Indian Ashram” in the anthology.

Steven Poleskie read next, and he read a part of his story “The Hosta,” which is the last fiction story in From the Finger Lakes.

The fifth reader, Jeanne Mackin has lived in Ithaca all of her adult life. She’s published six novels and has won a creative writing fellowship from the American Antiquarian Society.

David Guaspari, who read next, was trained as a pure mathematician, but he fell in love with writing along the way. He’s lived in Ithaca for 30 years. 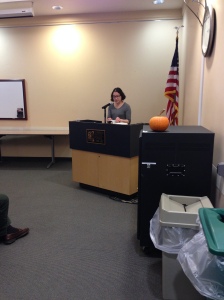 At 24, Amber Donofrio is the youngest author in the anthology! She recently graduated from Ithaca College and now writes for the Ithaca Times. Ovbiously, she was our seventh reader.

Barbara Adams, who read after Amber, is an associate professor of writing at Ithaca College. For the past 40 years, she’s written for the Ithaca Times and the Ithaca Journal as an arts journalist.

The penultimate author, Gene Endres was a radio engineer at Ithaca College, where he produced “The Hobo’s Lullaby” on WICB-FM for 31 years.

And finally, Nino Lama is an attorney as well as an Ithaca native! His piece in the anthology is about how his mom flew to Italy to meet who would become his dad.

For the last picture, I took one of the crowd, just a few seconds after the readings! Such a lovely group of people, and I wanted to thank them for coming out! We would be nothing without you, and we hope that you continue to support us!